In April, the FDA approved KYBELLA™ which is a synthetic deoxycholic acid. Deoxycholic acid is a naturally-occurring molecule in the body that aids in the breakdown and absorption of dietary fat. Using a tiny needle it is injected into the fat under the chin where, it destroys fat cells. At this time it is not indicated for other areas of fat, only under the chin. 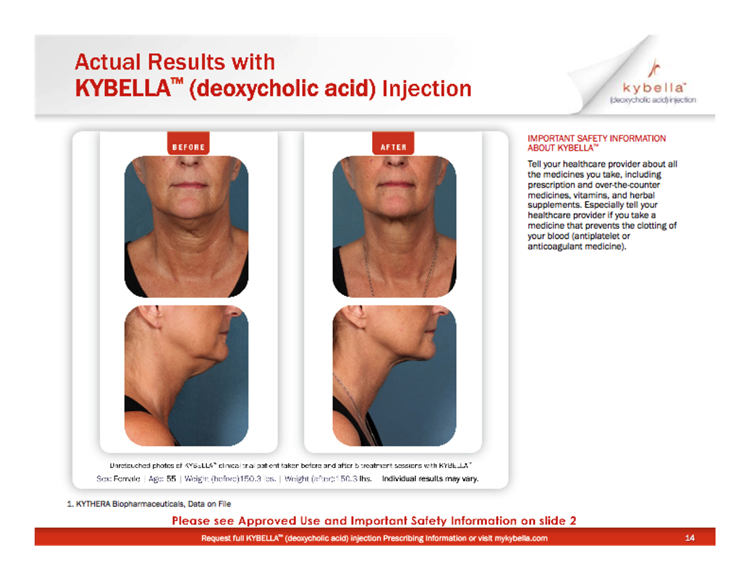 Approximately 1,600 patients were treated with KYBELLA™ in clinical trials. Of those patients, 68% responded to treatment. While that does not seem like a large percentage, response to treatment was defined by very strict criteria in the study. A larger number of patients (79%) were satisfied with the appearance of their face and chin after treatment.

How Are Treatments Performed?
KYBELLA™ is a liquid that is injected under the skin using a tiny needle. Usually multiple small injections (average of 20 but no more than 50) are made in the pocket of fat under the chin. the area is numbed with a local anesthetic, such as lidocaine, before the treatment to eliminate any pain or discomfort from the injections.

After treatment the patient can use ice packs for 10 minutes every one to two hours the first day to help diminish swelling and bruising from the injections. Ibuprofen can be taken to help with tenderness after the local anesthetic wears off. Swelling, bruising and numbness were the main side effects. The swelling is worst the day after treatment and better after a few days. Bruising can be covered with makeup or scarf.

What are the risks of the treatment?
In the clinical trials, about 4% of patients developed an asymmetrical smile due to irritation of the nerve or muscle that controls the smile. This effect resolved on its own after an average of six weeks. Difficulty swallowing was another rare side effect (2%) that was temporary and re-solved on its own. These rare side effects can be avoided by proper dosing and placement of the medicine. It is important to have a physician who has been properly trained perform your treatment.

How Many Treatments Does it take to See Results?
It takes an average of two to four treatment (up to six) sessions to see the best results. The treatment sessions are usually spaced four to six weeks apart.

What About Loose Skin?
Loose skin under the chin, also known as skin laxity was not addressed in the clinical studies. At a recent meeting in Chicago, some of the original investigators relayed that skin looseness did not worsen and one physician stated there was a 25% improvement. There are nonsurgical skin tightening devices such as Venus Freeze and Thermage. It will be interesting to see if patients who have both double chin and loose skin could get an even better result with a combination of these skin tightening devices and KYBELLA™

How Long Do Treatments Last?
It appears that the treatments are very long lasting. The patients continue to see long lasting results from their original treatments for up to four years now, which is the longest amount of time since the original patients were treated. 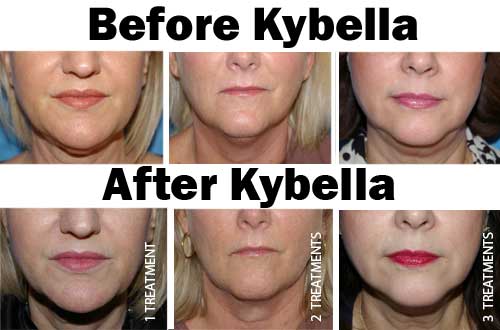 Call the office to learn more about this exciting new treatment!